Myself and Sinéad attended the Knitting & Stitching Show at the RDS a few weeks ago. After the initial irritation at having to pay €16 in followed by getting in the door and seeing programs for sale for €5 (seriously, we just paid €16 to get in somewhere where we’re going to buy stuff, please just put up a bloody map so where we can see where stuff is). Generally the whole model of paying into stuff like this is a bit annoying. But anyway… I digress…

It was pretty enjoyable and a large cross-section of people were in attendance. There was a good atmosphere and plenty of enjoyable chit chat with fellow enthusiasts while we were browsing around. Although a few of the punters were a little more familiar than I’d like “hmmm… what are you going to do with that? *I* would never touch that material, it’ll be a disaster”. At the Michael H stand in particular, there was a bit of the first day of January sales madness in a few eyes if you were holding an item someone else wanted. Also, one lady, after asking me if I sew and my answering “yes” posited that I “must not be a city girl”. That’s a new one on me!

All in all, it was fun. There was plenty of fabric. Quite a lot of it was aimed at crafters, quilters etc rather than dressmakers but there was still plenty. 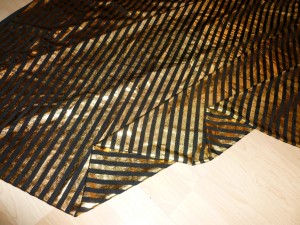 I’ve mentioned before that I’m fond of the old shiny fabrics so this one is surely no surprise. It was €2.50/m at the WM Trimmings stand. Pretty cool eh? If all else fails, I can drape it over me and dress up as Cleopatra at some point! My plan for it is a drapy dress or top. 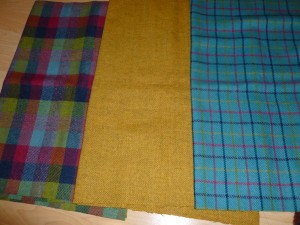 This was the star of the show for me. They had a few rolls of fabric on the Magee stand but they were pretty drab for my tastes. Not that everything has to be BRIGHT but none of it really grabbed me. They also had packs of material made up. These were aimed at crafters but when we took out the material it turned out each one was a pretty perfect size to make a short skirt. Hurray! There were 6 pieces in the pack for €75 which is very good value for tweed. The ladies on the stand were also very nice and helpful. We divvied out the spoils in the refreshment area on our scone break. My 1st pick is the blue on the right, followed by the yellow in the middle and then the bright check (look familiar?). I love them all. This may have something to do with my being part of the Clueless generation. 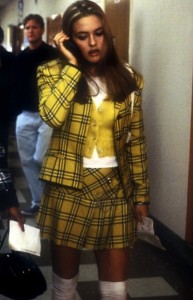 Yes, I am totally going to look like Cher. If I even start talking about knee socks though… someone please stage an intervention.

In my head they’re all going to be skirts at this point. I’ll see how I feel about more tweed skirts after the first one though. I’m planning on using the New Look 6103 pattern (see short version below), with a straight bottom seam. And I’m planning on getting going with it ASAP! Tis the time of year for tweed skirts and all that! 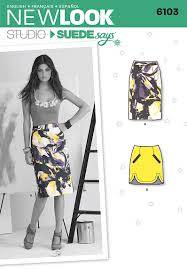 I got the following from the Michael H stall (also mentioned here). There were quite a lot of things I would have liked from here but not having unlimited funds went for these: 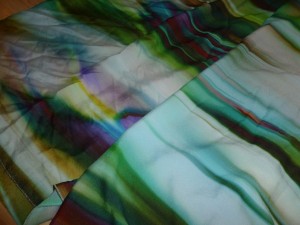 I don’t think the photo does this justice (obviously it would help if I’d ironed it!). It’s a really beautiful flowy fabric (I’m guessing viscose, I really need to learn this stuff). It’s not sheer either so lining isn’t necessarily needed. I’m thinking a dress with a flowy skirt. It would make a nice maxi dress but I never wear them so knee length it will be! If I’m attending any weddings next summer I think I’ll go for this. As far as I remember this was €18 for a 3m piece. 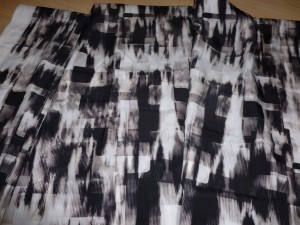 This one I also love and is not so summery which is good given the current season! I can’t for the life of me remember how much this was but I know it wasn’t expensive – Michael H was my last fabric stop. I think this is cotton. It’s not very thick but it does have a bit of stiffness to it. This will be a dress whenever I identify which pattern to use.

And finally from Abakhan (https://www.abakhan.co.uk/): 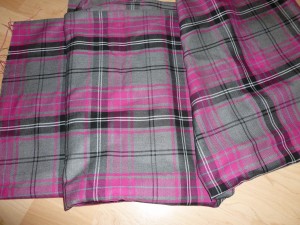 This was the first bit of material I got when I got in. It was £7/m and I think it’s a cotton/viscose mix. I really like it but if I’d known I was about to go bananas on checked tweed it miiiiggghhht have put me off! I’m thinking about making a dress out of this. Just need to make sure that it doesn’t look too kiddy.