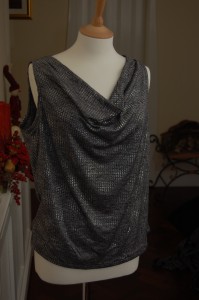 So… Christmas is the anti-blog! It also didn’t help that my one pre-Christmas sewing project was the top above which was a present for my mother – can’t really write about something you’re giving as a present!

As a result of it being a present, it is one of my nicer finished projects (I frequently get white line fever and just want to wear the damn thing!). 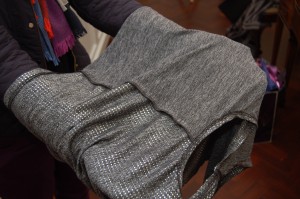 Woo – look at that over-locking – niiiiccce…. She didn’t even know I’d made it when she unwrapped it – success!

I used New Look 6108 (look C). Sinéad has made this before and Mammy admired it so I thought I’d give it a go. I got the material in Murphy Sheehy – pretty cool I think. FYI – do not iron the side with the metallic dot bits – they melt right off! 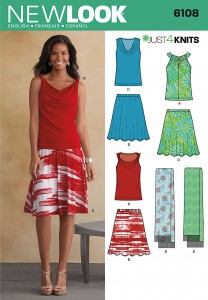 The pattern only has lining for the top half of the front (essentially the cowl part) but on Sinéad’s advice I lined the whole front section. She actually advised lining both front and back I thought that would be a little too bulky with this particular fabric. Even with the extra bit of lining I needed way less fabric than the pattern suggested. I think a metre would do it. Although I would feel mega-guilty if someone ran out of fabric while making it so… eh… don’t listen to me!

I’m not very experienced with jerseys and didn’t get my act together to buy a ball point needle (which are apparently the business) but I got on ok. I generally started seams by hand with the wheel to avoid the whole thing getting sucked down into the machine (this may be an over-dramatisation of events).

Due to the aforementioned gift nature of the project I did end up picking and re-doing a few seams. I would recommend the pattern though, it’s fairly simple and I think it’s a really nice top. 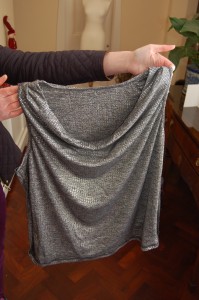 How nice does my parents’ hall look as a backdrop – jealousy (I’ve yet to settle on somewhere in our apartment for photos – too many bikes, guitars etc!).