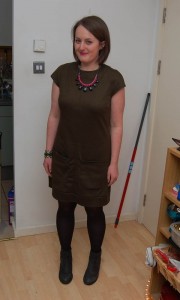 Imagine the scene, you are visiting family at Christmas. There is a biiig cupboard full of fabric (belonging to someone who once appeared on Head to Toe due to her dressmaking prowess – cool eh?) and you are invited to take… whatever you want. Sweeeet. This green fabric was part of my haul from The Heritage Cupboard (more to follow in a later post).

I bought the pattern below at the RDS show – I think it was €3 so pretty good value. Hmmm… maybe I should have upped the ante on the eye make-up front for the photo. 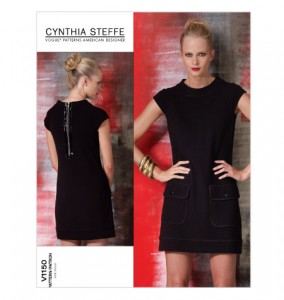 I decided to make it 2″ longer. I then proceeded to cut it out in front of the tv, with a glass of wine. 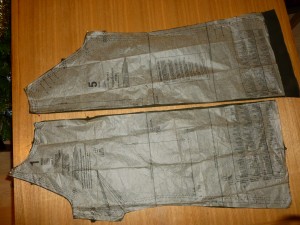 Notice a problem in the photo? Yes, I added length to the back only. I’m not too keen on the old mullet dresses so… had to cut it out again. This time I managed to cut with a flaw in the fabric right in the middle of one of the pieces. GAH! Third time lucky. I was informed though that this incident brought on a particularly bad dose of my usual sewing Tourette’s.

Here’s another photo on my (NEW!) mannequin. Apologies for the creases throughout the photos. Perhaps shouldn’t have taken all the photos after wearing the dress for a few hours sitting down watching a match in the pub. 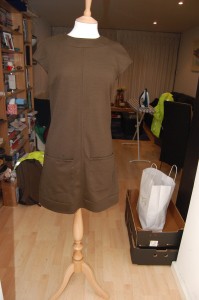 Below is a close up on the neck. I generally like round necks but this is a little high for my liking. Still, I like the dress. The thick jersey is very comfy, verrrry January. 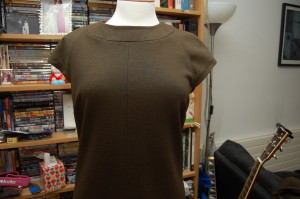 I’m not sure if I’d go for the pockets again. I’ve since re-done the top stitching on the left pocket as it was a bit ripply. I am generally a fan of pockets but I think in hindsight the whole thing would look a bit slicker without them. 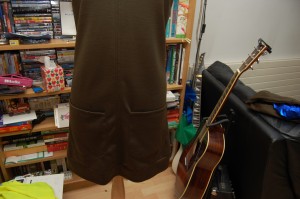 All in all, I really like the dress. It’s straighter than I would usually go for but is lovely for bumming around the house without looking like a total slob. Also no matter how many Terrys Chocolate Oranges I consume in a sitting… still comfy. Win win. Hmm… not quite out of the Christmas way of thinking yet …